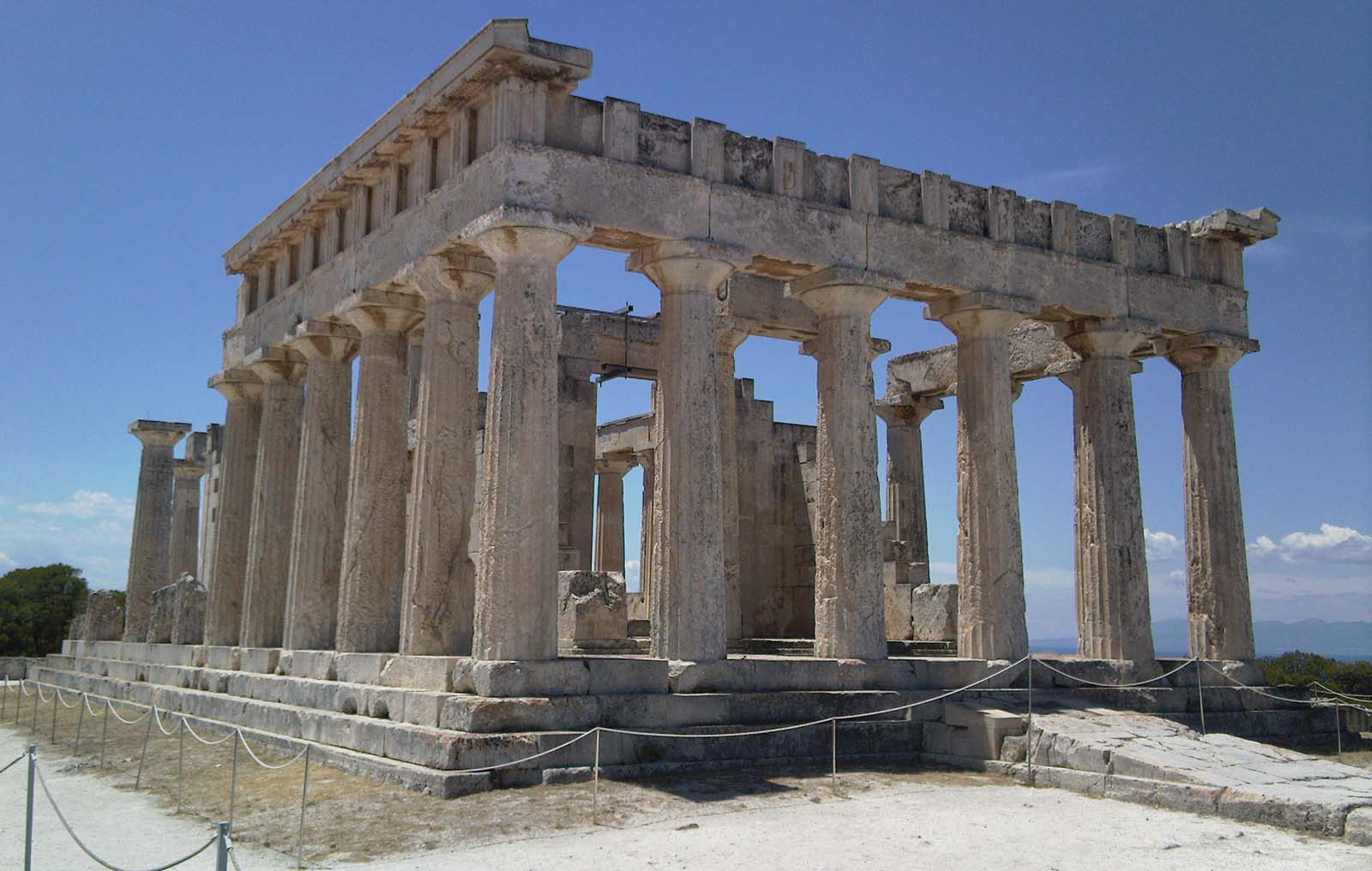 Temple of Aphaia (or Afea): The must-see attraction

The Temple of Aphaia (or Afea) in Aigina is one of the major attractions that one can see on the island. Built on a hill, at 160 meters, it is surrounded by pine trees. It also stands out for its unique energy.

Since prehistoric times (1300 B.C.) it has been a unique place of worship! But it was during the Archaic period that the sanctuary flourished, when three temples were built in succession at the same spot, with the last one still standing today.

Where to find it

The temple is 15km away from the capital of Aegina (2km east of Mesagros) and was built between 500-490 BC on top of the previous temple, which suffered damages after a fire in 510 BC. The Aegineans therefore decided to tear it down while keeping the gate and the large altar. Then, they rebuild a new one that would display the works of the “Aeginean” School of sculpture. The new temple took its final form in 500 BC and is an excellent sample of archaic architecture.

Bonus info: Ictinus and Callicrates supposedly used this temple format as a model for the design of the Parthenon.

The architecture of the Temple of Aphaia

Another feature of the architecture, geometry, technical and physical aspects regards the external columns which incline slightly inwards and the columns located at the corners which are slightly thicker than the rest. Today only 24 of the 32 columns are preserved.

How it got its name

The sanctuary was dedicated to the goddess Aphaia. Pausanias mentioned the Temple of Aphaia in the 2nd century AD; he identifies Aphaia with the Cretan goddess Vritomartis – Diktynna, daughter of Zeus and Karme. According to the legend, Minos, king of Crete, fell in love with Britomartis. Thus, he chased her into hiding in the sea, where fishermen caught her in their nets and pulled her aboard their boat. A sailor then, too, fell in love with her. So she jumped into the sea and swam to the island of Aegina, from where the boat happened to be passing by.

Britomartis continued looking for a hiding place and eventually ended up on this remote hill of Artemis where the goddess made her vanish. In her place people founded a statue named Aphaia (Aphaia = vanished). In this position the Aegineans founded a sanctuary in honor of her and built the famous temple of Aphaia. Later the goddess Aphaia would be identified with Athena so the church got the name Athena Aphaia.

The temple of Aphaia in Aigina was well known since antiquity for its pediments, which adorned both of its narrow sides. The sculptures of the pediments were colorful and made of Parian marble, with themes taken from the Trojan War. Back then, Aeginean warriors and descendants of the patriarch king of the island, Aiakos, had distinguished themselves. Present in both pediments is Athena, as the central figure.

The Aegineans promoted their island’s legacy as the homeland of the Aiakos dynasty. At the end of the 6th century BC, a period during which Athenians were menacing Aegina, they decided to change the pediments to emphasize their descent from Aiakos and of course their achievements.

The Temple of Aphaia in modern times

The sanctuary of Aphaia was not maintained for long. After the Athenian enforcement in Aegina, from the mid-5th century BC, the sanctuary began to decline. Thus, by the end of the 2nd century BC the area had already been abandoned and has since been preserved as seen today.

The first excavations took place in 1811 by the architect Ch. R. Cockerell and his friend Baron von Hallerstein, who visited the site and excavated the sculptures of the pediments. They transported the sculptures to Italy and then in 1828 to Munich, where they remain on display at the Glyptothek of Munich.

The German Archaeological Institute carried out systematic excavation of the monument  in 1901, under the supervision of Ad. Furtwangler and H. Thiersch and later, in 1964-1981, under that of D. Ohly. The years 1956-1957 A. Orlandos and E. Stikas carried out restoration work.

People say that the Temple of Aphaia in Aigina with the Parthenon and the Temple of Sounion form an imaginary isosceles triangle.The sacred triangle of antiquity which the ancient Greeks took care to observe and apply when it came to the architecture and energy of a temple. When the atmosphere is clear, there is direct visibility between these three temples that the ancient Greeks used as a way of communicating in case of attack by enemies.

Sorry, no posts matched your criteria.